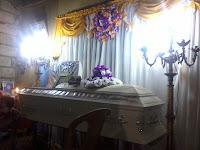 I recently attended the last night wake of a relative in a barangay in Maddela, Quirino province. My family stayed until the funeral rites the following morning. My uncle's family is somewhat traditional and have observed a lot of customs that they themselves could not explain. But as they say, you will lose nothing in observing traditions.

White headbands (Ilokano: baridbed) - traditionally, the white headbands are worn to suppress headache caused by excessive crying. Now, even though the members of the family don't cry enough, they were the headbands as an identification. They are worn throughout the wake until the funeral.

Black bar pins - they are also worn by the immediate family and close relatives to signify mourning. They are worn until the 40th day of death even after the funeral ceremony.

Food offering (Ilokano: atang) - the family pretend that the person is still alive and separate a portion of whatever is served to the visitors and place it in front of the photo. 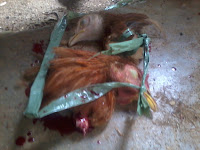 Here are some that I have never seen before.
Chicken offering - the chickens (hen and rooster) are beheaded before the coffin is taken out of the house. The reason behind, these chickens will go ahead and crow to announce the arrival of the dead in the life beyond (tapno agtaraok ket mariing ni San Pedro).

Diram-os (washing of face) - after the funeral rites, family members and relatives go through diram-os using the water from boiled guava leaves. This is to ward off the presence of evil spirits that may have got into the individuals while in the cemetery. After that, each got a handful of steamed glutinous rice to eat (that was not explained to me, but I did not perform any of these anyway).

Other customs include:
Not sweeping the floor because another family member might follow the dead.
Not taking a bath on the duration of the wake lest another death may occur in the family. This is followed by golgol (shampooing) after the burial to wash any power of evil spirit.

When my father and grandfather died, even though their remains stayed in our house for days, our family did not observe most of these customs, except for wearing the black bar pin. Many visitors told us what to do and not to do, but because we could not get enough rational explanation, we did not observe these traditions. We swept the floor so dust won't accumulate and we took a bath everyday!
Shared by Unknown on Tuesday, August 28, 2012